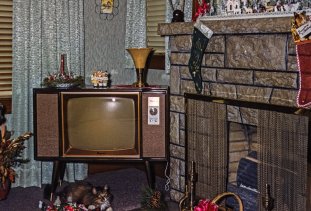 She leans to the side and turns on and off without notice, but so do I, I guess?

At least the job is done.

I’m not a big Christmas person. I’ve debated if this started later in life, or whether it has always been this way. I was a pretty sickly kid, and spent a few key Christmases in the hospital and away from family. I mean, when they shuttle you between an oxygen tent and one of the Humber River custodial staff dressed like a budget Santa Claus, it tends to stick. I remember a lot of the efforts that were made back then to try and retain some of the magic childhood, but most were just alarming when you’re a four-year-old whose primary objective is to go home.

Keep in mind: it was also the eighties, era of Stranger Things. And for all of the Millennials in the house, the strangest thing about that era was the lack of adult supervision. That’s not just a device they use to get Will Byers into trouble. There’s a reason child abduction was at its peak.

I was alone a lot of the time. Almost all of the time, actually. Sometimes this led to dealing with mean nurses, or being poked and prodded by med students, or staring at the wall and wheezing. Other (healthier) times, it meant I could wander the wings, play board games with other kids, steal ice cream from the supply fridge, and watch Star Trek on an ancient television mounted over my bed.

And I would wait for my parents to visit, and pray to be discharged, like a tiny soldier fighting a tiny war in my lungs. Even then, it would still mean months of difficulty breathing, and waking up in the middle of the night to have an oxygen mask strapped to my face. BUT I DID NOT CARE. I would be home with my toys and my sister and my toys and my grandmother’s cooking and MY TOYS. That was all that really mattered.

Don’t get me wrong. Those few serene hours on the day itself, when you’re surrounded by loved ones and free from the distractions of the day-to-day? There really isn’t anything else like it.

And I’m lucky enough to be invited to family functions, which is something I never take for granted as a PROFESSIONAL GAY PERSON. Even in 2017, most of the queer people I know handle the holidays with kids gloves. The road to self-acceptance and self-actualization is a long one, and returning to even the most open-minded home can feel a lot like taking a stepping back into old expectations. You’re continually negotiating how much of yourself to share, or reminded of how much your path has diverged from heteronormative expectations, or forced to inhabit an older version of yourself that you’ve outgrown.

If you have a long-term partner, this only becomes more complex. Do you bring them along? Will they be welcome? Are you willing to deal with the stress? And if you don’t have a partner, that’s its own can of worms. Why is he single? Is this like a specific type of dysfunction? Are all gays like that? What is wrong with him? WHAT IS SPECIFICALLY WRONG WITH JP LAROCQUE?”

It can be a lot. (Lena Waithe tackled this brilliantly in the Emmy Award-winning “Thanksgiving” episode of Master of None. Watch it.)

But for me, it’s really just the disruption. I love my well-trod routines, and hate shopping, massive crowds and the line-ups. I also dislike lights, trees, presents, snow, hugs, smiling, Carly Rae Jepsen, hot chocolate, and laughter in public spaces. Look, my version of a party can be pretty weird. I’m an extrovert, but I’m also a writer. Like, maybe I WANT to stare at the lights, listen to Nat King Cole, and drink spiked egg nog by myself, MOM. Maybe that’s Christmas to me.

In all honesty, the social pressures can be an anxiety-inducing nightmare. And as I get older, I’ve found that I have a way better holiday by making it manageable and just abandoning all of the expectations. Limiting all of the noise. Gifts purchased early, social commitments locked down, and keeping my decorations to a few gay flourishes around my apartment. And they’re not even that gay. Like, maybe a three on the Kinsey Scale. I could definitely go bigger.

And, of course, let’s not forget my Saggy Ass Sad Girl Christmas Tree, in all of her flickering, tilted glory. Happy holidays, Tree! Here’s hoping my cat doesn’t destroy you.