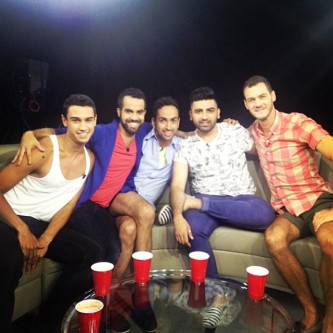 From 2013 until 2014, I was selected to be a part of an elite group of homosexual assassins posing as reality television personalities.

That is clearly a lie.

I was offered the opportunity to join the cast of the MTV/Logo series 1 Girl 5 Gays for two seasons – a regular fifth season, and an abbreviated “All Stars” season.

(I was one of the gays, in case you were wondering. That’s me in the center of the above photo, looking like my torso is detached from my legs like the Waiting Room Lady in Beetlejuice.)

The series was already a well-established water cooler show by the time I wandered on set, and so the experience was akin to what I imagine Hillary Swank must have felt like on Beverly Hills 90210 in season eight or whatever. Or how the cast of Saved by the Bell: The New Class felt? I’m pretty sure I was the new Screech. Or New Coke?

(None of these pop culture references will make any sense to the Millennials.)

I say none of this to minimize the show or the experience. I had a great time on it, and got the opportunity to work with a lot of very talented guys and gals who were making good television. And in the years since the series ended, lots of people still come forward and talk about the impact it had on them and their ability to talk about sex and sexuality. So that means something, and I feel very lucky to have been a part of it.

Plus, all of my exes came out of the woodwork and were super sweet to me when the show was airing, so that was nice.