Batman Returns has always been a pretty singular film for me.

Even after a film studies degree, a few years kicking around the industry, and a mental back catalogue of countless art films, I still hold it in incredibly high regard. It could be that I saw it as a kid, squished into a packed theatre in Etobicoke with my father, and that the film’s vague plot machinations, over-the-top performances, and deeply inappropriate sexual innuendo imprinted on my malleable brain. It could be the nostalgia, and all of the childhood associations that the film brings with it.

I was a bit too young for the original Tim Burton Batman to really mean anything aside from lots of Prince jams on the radio, but its sequel hit a sweet spot for me. It stuck.

(Thank god I didn’t get the “semi-hard, I’d say” line until much later. Much, much later.)

It’s not a perfect film. In fact, Burton’s eighties and early nineties output tends to suffer in an internet era full of instantaneous playback and an eye for continuity errors.  There are logic and plot holes, obvious sets, and crappy special effects. But Burton’s films seem to resonate on a different frequency. I remember once reading a theory that Stanley Kubrick intentionally used dream logic in constructing The Overlook Hotel in The Shining to aid in disorienting the viewer. Similar points have been made about David Lynch and the techniques he uses within his body of work. Now, even as a fan of Batman Returns, I’m cautious to place Burton on the same playing field as either of those filmmakers, or to assign that much intention to his finished films — which had a ton of studio interference. Nonetheless, he has a singular vision, and a knack for creating imaginative universes populated by damaged characters. He knows his references, and his blind spots seem to work in his favour. His films are flawed, but still feel like living things.

You just have to look past everything making sense. And it should be clear that his films aren’t really interested in making sense. Hello, Edward Scissorhands?

QUICK HISTORY LESSON: After the massive success of Batman, Burton was reluctant to direct a second film in the franchise. Hoping to sweeten the deal, Warner Brothers gave him more creative control, and so he chucked out a first draft of the screenplay featuring Catwoman and Penguin on a treasure hunt. He hired Daniel Waters (of Heathers) to do a few passes, which ultimately led to many of the elements that ended up in the final film, including Shrek, the satire around Penguin’s bid for mayor, and Selina Kyle as a lowly secretary-turned-psychosexual vixen. Waters also deleted a version of Robin, as he felt the film already had too many characters and that the character was worthless given that Batman was “the loner of loners.” (Smart man, and somewhat hilarious given that they had already cast Marlon Wayans in the role AND paid him for his time.)

The film went through one more uncredited rewrite, and was eventually cast with Michael Keaton as Batman, Danny DeVito as Penguin, Christopher Walken as Max Shrek, and Annette Bening as Catwoman. Bening would later withdraw due to pregnancy, and be replaced by Michelle Pfeiffer. And in contrast to the first film, principal filming would abandon the hazy Gothic locations of London for a confined soundstage experience in Los Angeles.

Upon its release, critics were torn over what was clearly a Tim Burton film first and a Batman film second. Praise was directed at the visuals, Elfman’s score, and the performances (particularly Pfeiffer and DeVito), but a parental backlash formed over the violence and overt sexual content in the film. I mean, you’ve seen Pfeiffer’s catsuit, right? And this? And this? And this? McDonald’s ended their promotional tie-in, and the lacklustre box office led Warner Brothers to rethink their strategy. Burton left, then Keaton. Ideas for the continued adventures of Pfeiffer’s Catwoman were shelved, and later evolved into the Halle Berry abomination we all know and detest. And the WB decided to go with a lighter and more playful tone under hot new director Joel Schumacher.

And we all know how that ends. Bat nipples.

But twenty-five years down the line, and the film’s legacy is being reconsidered. It could be that hindsight is 20/20. It could also be that there have been far shittier Batman movies over the last two decades. Or it could just be that what constitutes a hero in our culture has changed.

When Batman Returns came out, Roger Ebert argued that “superheroes and film noir don’t go together; the very essence of noir is that there are no more heroes,” but after countless anti-heroes on prestige television and the Nolan/Snyder grim-dark interpretations of DC Comics, Keaton’s Batman doesn’t seem so bad. In fact, he’s basically the contemporary template for a leading man. Plus, his adversaries aren’t just men in costumes, but men in suits. Corrupt politicians, evil moguls, and an easily manipulated electorate. No one can accuse this film of not having a degree of foresight.

Burton’s Batman is conflicted and kinky, but he still rises to the occasion. He still fights for good, even if his attempts to save the day and win the girl are ultimately for naught. He’s not proud and upstanding, but aware of his own dysfunction. He’s a flawed man in a hopeless universe, and desperate to find someone who can understand his worldview.

Which brings me to Bruce and Selina, and one of my favourite scenes in cinema history. Yup, I said it.

INT. SHREK’S DEPARTMENT STORE – NIGHT. Walken’s Shrek holds a holiday costume ball, licking his wounds after the Penguin’s mayoral campaign collapses. Bruce attends the party, out-of-costume and hoping to find Selina. Selina attends the party, out-of-costume and hoping to kill Max. They collide. “Guess I’m tired of wearing masks.” The two begin to dance, leading to what can only be described as tour-de-force performances by both performers, as the characters flirt, deflect, reveal their true selves, and comfort each other. 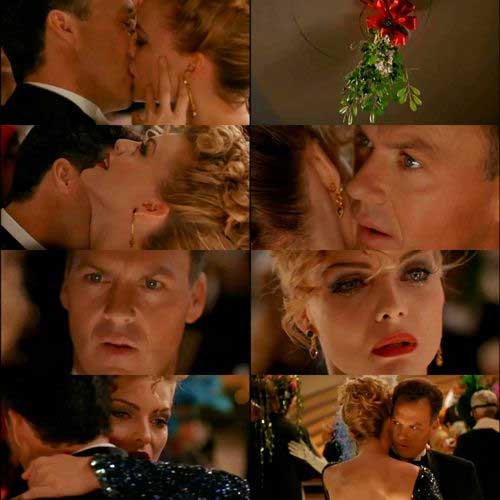 Below is the script, albeit with a few lines that ultimately got removed for pacing:

Both Keaton and Pfeiffer are known for their intensity, and Burton lets them play the realization without any dialogue (thank god), only supported by Elfman’s score. It’s arguably the most memorable moment of the whole film. Sexy and funny and sad, as these two tragic figures realize that they’re perfect for each other, but also doomed. That they share something fundamental, but that it simply isn’t enough. That in Gotham City, your soulmate can also be your greatest foe.

(Now, I’ve made jokes in the past that watching this scene at such a young age had a negative impact on me. But I mean, who isn’t drawn to adversarial love relationships characterized by intensity over compromise? Or attracted to brooding men with secrets? Or obsessed with cats? Definitely not me, I tell ya.)

For all of the criticisms that have been levelled at Burton for not getting Batman right, this scene just nailed the Batman-Catwoman dynamic. It set the stage for Bruce Timm’s informed take on the relationship in Batman: The Animated Series. It became so iconic that Nolan tried to crib the scene for his series years later, but failed to capture the same intensity.

This perfect scene. It left me hoping that these crazy kids would figure it out and find their way back to each other, even as I know that they could never be together. But being together was never the point of Bruce and Selina, or Batman and Catwoman, and it’s why the ending of The Dark Knight Rises feels like such an utter cop-out. These two would never be happy. Two halves don’t always make a whole. 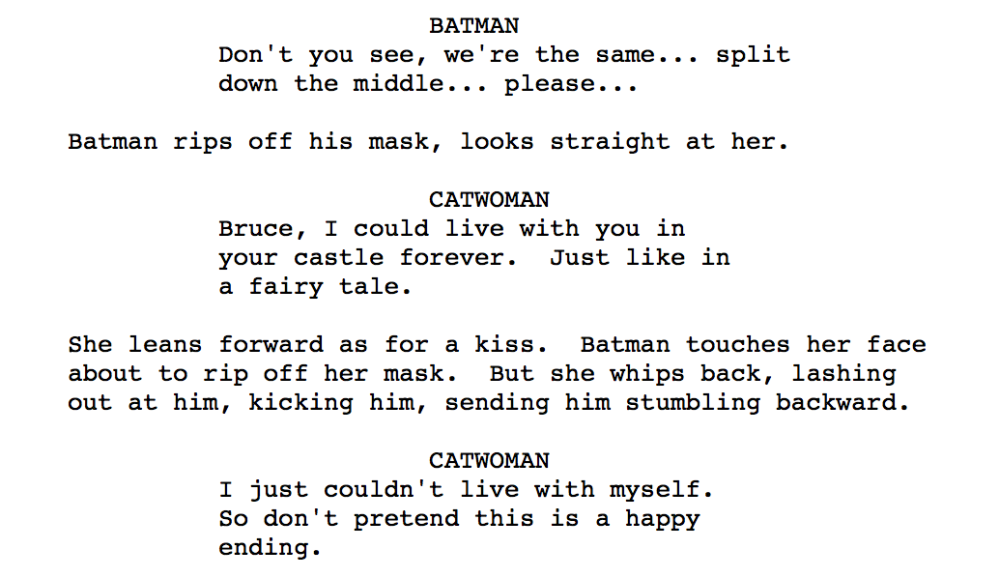 The only place they could be is apart. And so that’s where we should leave them.