Remember when I made that whole post about the relationship between Bruce Wayne and Selina Kyle? And I unpacked the brilliant ballroom scene from Batman Returns, but used it as a way to illustrate their perfect-but-imperfect love and how it played a formative role in my development as a young gay male? I even said this:

“Sexy and funny and sad, as these two tragic figures realize that they’re perfect for each other, but also doomed. That they share something fundamental, but that it simply isn’t enough. That in Gotham City, your soulmate can also be your greatest foe… Now, I’ve made jokes in the past that watching this scene at such a young age had a negative impact on me. But I mean, who isn’t drawn to adversarial love relationships characterized by intensity over compromise?”

Well, I clearly wasn’t paying attention to the news cycle, because while I sat around playing YouTube videos of Michelle Pfeiffer interviews and eating corn chips, Bruce Wayne and Selina Kyle got ENGAGED. That’s right. BATMAN, a psychologically unbalanced vigilante and 87-year-old millionaire bachelor, is finally packing it in and marrying his on-and-off girlfrenemy and career criminal of seventy-five years, CATWOMAN. 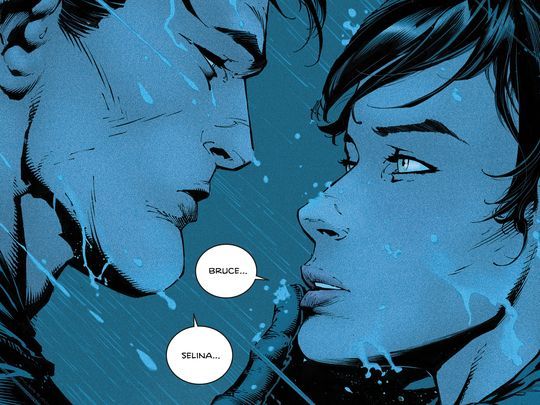 What the goddamned hell? Has everyone lost their minds? In a year where longtime crush Prince Harry had to announce his engagement to a biracial philanthropist who isn’t me, I also had to lose my alpha-crush Batman? And to Catwoman? Their dysfunctional relationship was my excuse after gay marriage passed and I realized that my sexuality alone wasn’t going to make my own dysfunctional nonsense permissible. But if a depressed crimefighter and a sexy cat burglar can make it work, I really have no excuses, huh? Go forth and Tinder, settling soulmates, sure, I love Mean Girls, etc.

(And things come in threes, so this can only mean that one of my exes will probably announce an engagement in the coming months, but at like my birthday party or something, so be ready, JP.)

Anyway, I haven’t been following the development of this particular version of the Bruce Wayne and Selina Kyle relationship, but it seems like the writers are not just using the controversial coupling as a way to sell more comics. They’ve actually taken the time to really dig into their respective histories and explore what such a relationship would mean for each character. Writer Tom King, one of the team responsible for the current storyline, says this:

“That to me is what true love is,” says King. “It’s showing who you truly are to someone. It’s letting someone know deep down who you are and that’s horribly frightening and it scares Batman as much as anything ever has.”

However, King adds, “they’re two broken people, and because they’re broken, they have the edges that fit together.”

Colour me intrigued. I mean, I don’t take a ton of this stuff with too much weight because:

a) comics cycle through story faster than daytime soaps, and

b) they are constantly rebooting and juggling different versions and continuities. I mean, technically this isn’t the first time Batman has been married, albeit to a different woman: 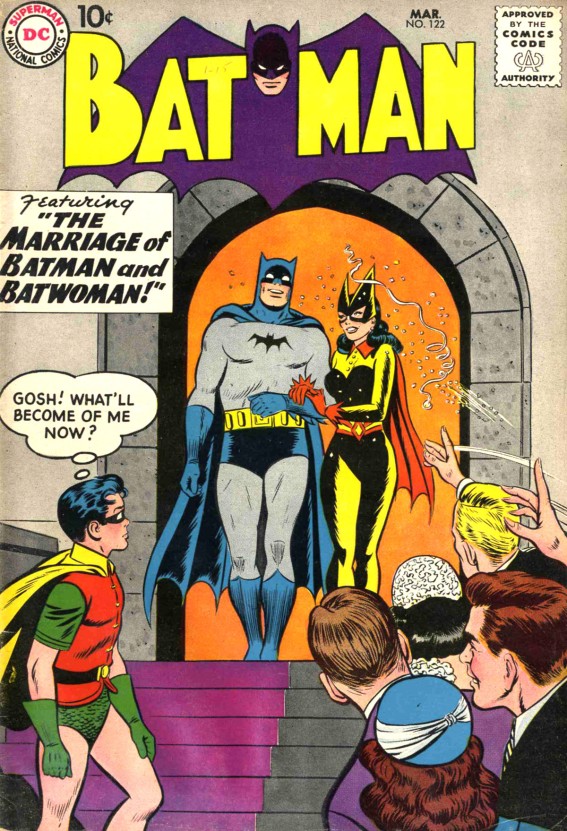 I hear ya, Boy Wonder. Still, at least King shows an understanding of the Batman-Catwoman dynamic. Plus, whenever a comic breaks a bit of new ground, that story tends to find a meaningful spot in the mythos and usually ends up getting adapted to film. And given the current state of DC’s film universe and the desire to reboot Batman yet again, we could end up seeing a better version of the Wayne-Kyle coupling onscreen than we have in the past.

So, we’ll see. Part of the appeal of the Batman/Catwoman dynamic is the fierce independence and the push and pull between right and wrong, so it’s hard to think of a harmonious coupling working without neutering both characters. But maybe I’m wrong.

Maybe I was wrong all along.